Welcome back to my “weird and wonderful” series where I feature photos showing a side of a destination that might not ever appear on a postcard or be included in a guide book. So far I’ve featured Milan and Prague.

Today, I’m back with part two of weird and wonderful Prague. You may wonder how I can top that cow statue with women’s asses or a restaurant full of dinosaur paintings? It’s very possible actually. Read on.

You never know when you may need a skull or alien themed bong or just a regular old pipe. You’ll find this shop just off of Old Town Square.

While I couldn’t find the exact address of this particular shop online, you’ll be happy to know there’s another one not too far away called Grow Man’s Plains where you purchase not only bongs and pipes but other supplies to help grow your marijuana crop. You can even buy products from their online store!

Head to one of the city’s many Thai spas to receive a Middle Eastern pedicure treatment where tons of tiny little Garra fish nibble the dead skin off of your feet. Especially fun is opting to sit in the front window where tourists and locals stare at you and snap pictures.

This particular photo is of the store window at Thai Paradise located along Wenceslas Square. While I never opted to endure this treatment, I did stop for a really nice invigorating 30 minute Thai massage here when visiting last July.

Treat yourself, as prices are cheap enough to entice even low budget travelers.

Spend a whopping 24 euros on one of these weird bobble head like containers sporting corporate logos and emblems of  soccer and hockey team. Toronto inhabitants will be thrilled to see a Toronto Maple Leafs container in the photo (second shelf, far right). And no, I didn’t buy one!

You’ll be able to find these in any touristy souvenir shop throughout Prague.

This past July, a hipster pleasing exhibition was being held at the New Town Hall Tower featuring all sorts of ironic movie posters by Michael Výstava.

Exhibit or not, visit the tower as a climb to the top offers up some really beautiful panoramic views of the city.

Apparently Prague is the place where bad girls go! I never would have known unless this t-shirt had told me. As with the odd themed containers, you can find these t-shirts at any touristy souvenir shop. 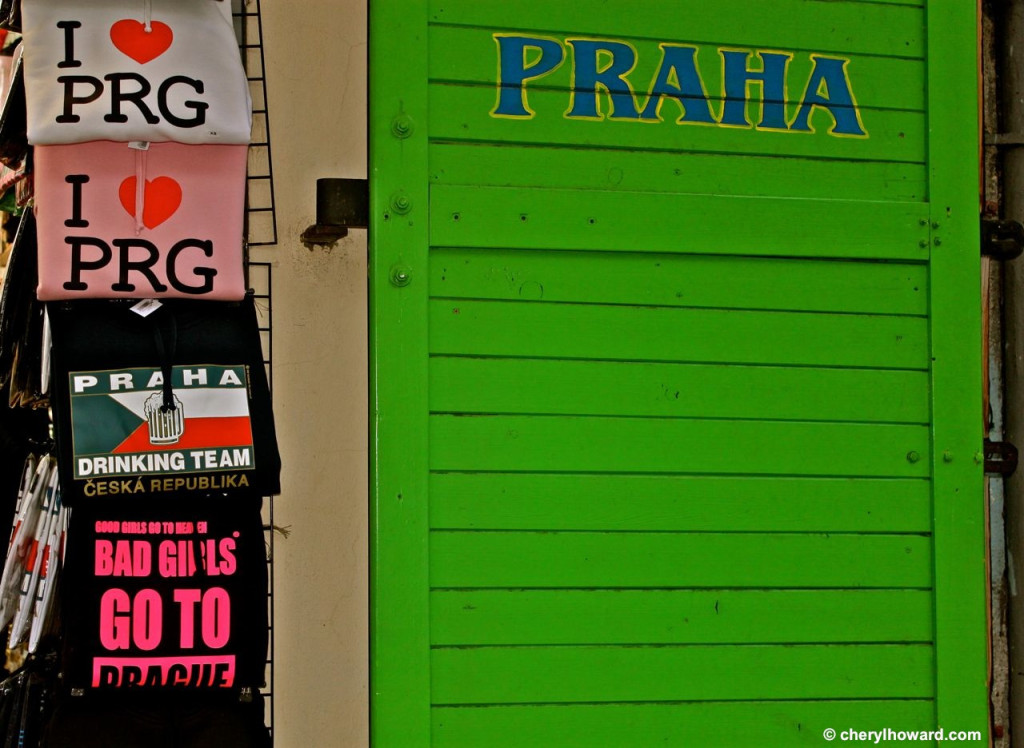 As much as Star War nerds would be excited to think that this statue is of Darth Vader, it’s really a Jewish golem.

The history of the golem is quite interesting. It’s been said that a 16th century rabbi created the golem to fend off antisemitic attacks and over time it became so violent that it began killing gentiles. Some even say the golem fell in love and became a monster upon being rejected. Eventually the golem was destroyed and hidden in the attic of the Old New Synagogue remaining until it’s needed again.

If the US’s Michele Bachmann or Rick Perry get elected as the next President, I’d say we’d need to wake it up!

Address: Near the entrance to the city’s Jewish quarter, not far from the Old New Synagogue. Červená 250/2, 110 00 Prague-Josefov.

After completing a night tour of Prague last December, our group stopped at a cellar pub for a beer or two. This lovely fire and ice sculpture was set-up outside and I couldn’t help but take a picture!

Prague is truly a weird and wonderful city. These two posts have convinced me to return for a third time and I hope to do so sometime soon!

The next time I’m in Prague, I’m going a mission to hunt down all the David Černý artwork featured throughout the city. You think these photos are weird, wait until you see some of his work which includes a tower baby and peeing statues.