Delight In The Tacky At The Romanian Kitsch Museum in Bucharest 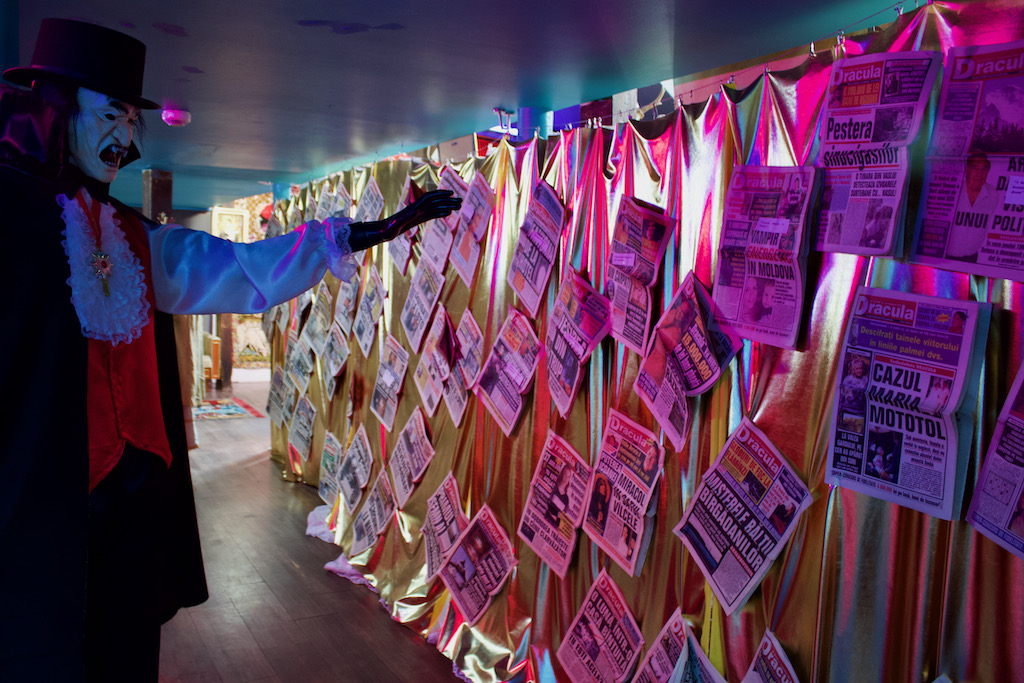 If you’re seeking something weird and offbeat to do when you’re visiting Bucharest, look no further the Museum of Romanian Kitsch.

This boutique museum features an exhibition that pokes fun at Romanian kitsch; tacky items that reflect a part of the country’s history and culture.

Delight In The Tacky At The Romanian Kitsch Museum in Bucharest

As the name implies, The Romanian Kitsch Museum features a large collection of more than 200 pieces of kitsch. Set in Bucharest’s old town, the museum is set in a historic building which spans two floors.

Opened in May 2017 by Christian Lica, the museum owner and curator is a well travelled Romanian who wanted to showcase his personal collection of kitsch items.

Most of the items featured in the museum are actually owned by him, with a small number of them being donated by locals.

You may wonder why there’s a museum featuring all the gaudy, tacky, and crazy items typically found in a Romanian grandmother’s house. The owner explains on his website:

The Romanian Kitsch Museum is the best way of understanding Romanian (sub)culture. Kitsch is defined as art, objects, or design considered to be in poor taste because of excessive garnishments or sentimentality, but sometimes appreciated in an ironic or knowing way. Romanian Kitsch truly is authentic as the Romanian people can be creative, ridiculous and proud! The museum looks to promote Romanian Kitsch in the most tasteful way. There is no good or bad taste, beauty is in the eye of the beholder!

The Romanian Kitsch Museum features different sections including Dracula kitsch, Communist kitsch, religious kitsch, interior design kitsch, modern kitsch, and even a section where you can “make your own kitsch.” There’s also an art gallery area featuring kitsch pieces that people have gifted to the museum over the years.

Some of the more notable and provocative kitsch items featured in the museum? A life-size Dracula statue, cushions in the shape of €1 coins, and a statue of David decked out in gold bling. There’s even a depiction of a woman (known as a “Pitzipoanca”) clad in fishnets, a neon coloured dress, and a knock-off Versace hat. The museum also cover topics like “fake news” (ever so prevalent these days) with headlines like “Extraterrestrials steal electric current.”

This humble museum is said to attract about 20 people a day, mostly tourists. Which is amusing since many locals think the ironic and sarcastic references will be lost on anyone who’s not Romanian. While this is somewhat true, most things are self explanatory.

If you want to go all out (someone pleaseeee do this and send me your photos!), you can even arrange to be picked up and driven to the museum in a limo.

Watch/share this video about the Romanian Kitsch Museum and better yet, subscribe to my Youtube channel for even more travel related videos.

What do you think about the Museum of Romanian Kitsch in Bucharest? Can you recommend any other “must see” places to visit in the city? Tell us about it in the comments below.

There are some things you need to know before visiting the Roman Kitsch Museum, so here are answers to the most common questions people ask.

3) How much does a ticket cost? At time of writing this article, entrance to the museum is free.

4) Is there a gift shop? No, there is no onsite gift shop or any online shop either.

5) Can I take photos and videos inside the museum? Yes, you can and frankly, it’s highly encouraged. You can have a lot of fun playing around in the interactive areas and taking hilarious photos for Instagram.

6) How much time do I need for the Romanian Kitsch Museum? You don’t need more than 45 minutes to an hour at the museum.

7) Does the museum offer guided tours? No, your tour through the museum is self guided.

8) Do I need to book in advance? As not that many people visit the museum, you can just show up.

9) Does the Romanian Kitsch Museum have wifi? When I visited, they didn’t but this may have changed since then. It won’t hurt to check with the friendly museum staff if they have a public wi-fi available.

10) Is there a place to store our bags or hang our coats? No, there are not any lockers or coat check. You should keep your belongings with you at all times.

11) Is the museum good for kids? Yes, they obviously won’t understand a lot of things, but they’ll especially enjoy the Make Your Own Kitsch section.

Some information about your transportation options in Bucharest, Romania.

1) To reach Bucharest’s city center, you can choose between a train, taxi, or bus:

For more information about how to get around Bucharest, see Wikitravel.

Where To Stay In Bucharest

These are some of the best Bucharest accommodation options:

1) Book a place to your stay while you’re in Bucharest:

2) I stayed at this cute studio apartment near Bucharest’s Old Town. Despite being a studio, the apartment is spread over two floors. The best feature is the bathroom where there’s a jacuzzi with mood lighting (which I thoroughly enjoyed). The hosts also couldn’t have been nicer, even recommending a nearby pub to eat at on my first night there.

Paying For Things in Romania

Tips and tricks for handling money matters when you’re travelling to Bucharest, Romania:

2) Romania is budget friendly compared to other popular destinations in Europe and you’ll find that your money goes a long way here from your accommodation, to eating out, and more.

3) If you can avoid doing so, wait to exchange your money somewhere in the city (you’ll find tons of places to do so) as exchange rates at the airport tends to be pretty high.

Good To Know About Bucharest

There are some things you need to know when you’re visiting Bucharest:

1) Make the most of your time in Bucharest and book one of these tours:

2) As a solo female traveller, I felt fairly safe during my time in Bucharest. In general, the country doesn’t have a lot of crime, and you’re more likely to fall victim to a taxi scam more than anything else. As to how it is for people of colour, it’s possible you’ll encounter racism. You can read more over at World Nomads.

3) If you like to see all of the quirky things when you travel, give some of my other articles a read:

Disclosure – This post contains some affiliate links. If you book a tour or hotel, I’ll earn a tiny commission at no extra cost to you. Thanks for your support.