A Tour of District 7 Through Budapest Street Art 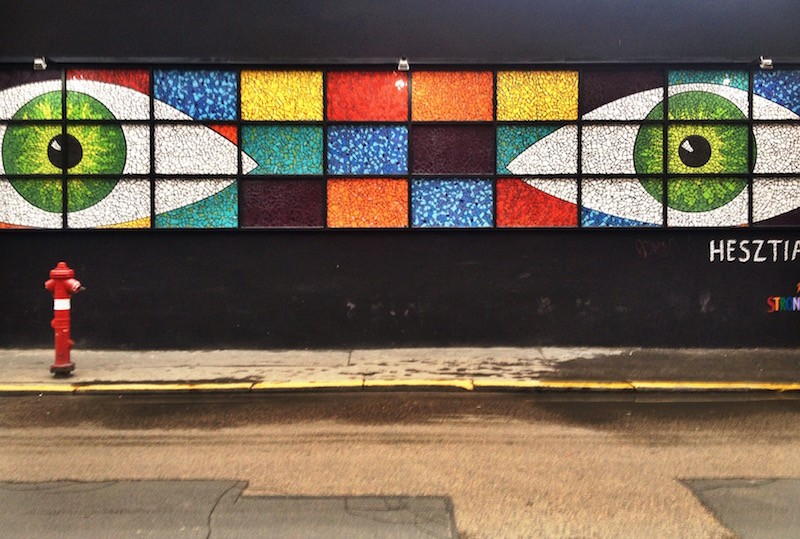 I feel like I know Budapest almost as well as I know Berlin. I’ve been there so many times that it’s become familiar, and getting around the city is like second nature. Perhaps I’m an honorary Hungarian after all? A friend once jokingly suggested this years ago when she observed my very obvious love (obsession?) for Budapest.

This begs the question, how does an “expert” like myself find new ways to discover my favourite city? Easy. Ask Google about “Alternative things to do in Budapest.” The all-knowing Google offered up a walking tour with Discover Budapest, which promised to take me to hipster cafés, community art spaces, and various instances of Budapest street art.

It only took me about 10 seconds to make a decision and sign up for the tour. At only €24 a pop, it wasn’t such a big expense and fit my overall budget travel style. In addition to the guided tour, I also set about walking through the city and came upon plenty more Budapest street art on my own.

A Tour of District 7 Through Budapest Street Art

There’s street art all over the city, and it’s most prominent in Budapest’s District 7. A neighbourhood filled with plenty of ruin pubs, trendy restaurants, cafés, and vintage clothing shops, District 7 is one of my longtime favourite areas of the city.

Recommended reading: Why you should visit these cool places in Budapest.

Through the Façade Rehab Project, local authorities granted permission for eight different buildings to be painted over with beautiful street art murals.

One of the most well-known murals in District 7, Playground, is located along Kiraly Utca. After waiting over two years for permission to begin work, a local group of artists known as Neopaint finally did the work for free so they could publicly show how quickly a rundown, old building could be transformed into something much more beautiful.

Polish artist Lukas Berge completed this Chill or Rage mural, with the intention to make you question whether you prefer to relax or get absolutely wild. The tones in the mural were set to match those along Akácfa Utca, the street where the mural resides.

Swallows, which regularly nest in Hungary, are said to be a symbol of tranquility.

4) Match of the Century

This famed “match of the century” references a historic soccer match at Wembley Stadium, in London, when Hungary beat England 6:3. England’s team had previously remained undefeated for over 90 years.

Another creation by Neopaint, the intent of this mural is to show the common ties between the Polish and Hungarian cultures.

The text on the mural reads:

“Hungary and Poland are two forever-living oaks, which have their own trunks, but their roots are far beneath the earth: they have joined and invisibly merged. So the existence and strength of each one is tied to life and health of the other.” — Stanislaw Worcell

The city of of Budapest is divided by the Danube River into two parts – Buda and Pest. In the mural, the Buda side is depicted as a turtle-human hybrid, while Pest is shown as the more lively side of the city. Here, the artist is expressing that although these two areas are within the same city, each one couldn’t be any more different.

This mural rather cutely titled Budapest Ain’t That Small shows there is more to Budapest than just District 7. The clouds surrounding the map show other neighborhoods around the city that are worth a visit.

8) City or Nature? Colorful Mother of Earth vs the Grey City

This detailed mural has been interpreted in various ways:

2) As a chain of DNA, showing the connection of the soul with the world when we are alive. The smoke shows that our souls will leave us for elsewhere, a dark reminder that none of us will live forever.

3) The whirl looks like a tunnel that never ends, a way to a remote destination not in this world.

9) Everyone Has a City

This mural was, by far, my favourite mural in District 7, as the attached concept is something to which I can completely relate. The title of the mural conveys that everyone belongs somewhere. Take, for example, how I came to adopt Berlin as my home. The male and female figures shown in the mural don’t necessarily represent Budapest, although they do resemble figures of Hungarian folklore.

While the murals are surely meaningful and beautiful, the other instances of Budapest street art around the city are no less compelling.

Take for example, the sticker art by the Sheepist pictured above. His stickers can be found in different European cities. I even spied one in Prague when I travelled there for a weekend last June.

Space Invader street art appears in cities all around the world. What makes this one unique is that it is set in the cobblestones of a street in District 7. Although it’s no longer functioning, it used to light up when you stepped on it.

Note – For each piece of street art, I’ve listed the name, artist, and location, when known. If you have more details on any of the identified artists, please let me know in the comments below and I’ll update the post.

What do you think of the street art in Budapest? Do you have any other tips for the city? Leave us a comment down below.

1) You can see most of these yourself by walking along Kiraly Utca or by booking the Alternative Budapest Walking Tour. The tour is €24 per person.

2) To check out accommodation options for Budapest, take a look on booking.com.

3) Make your time in Budapest memorable and book a guided tour with Get Your Guide.

4) If you like travelling Europe, check out some of our popular posts.