The Stockholm Public Library Is A Swedish Architectural Icon 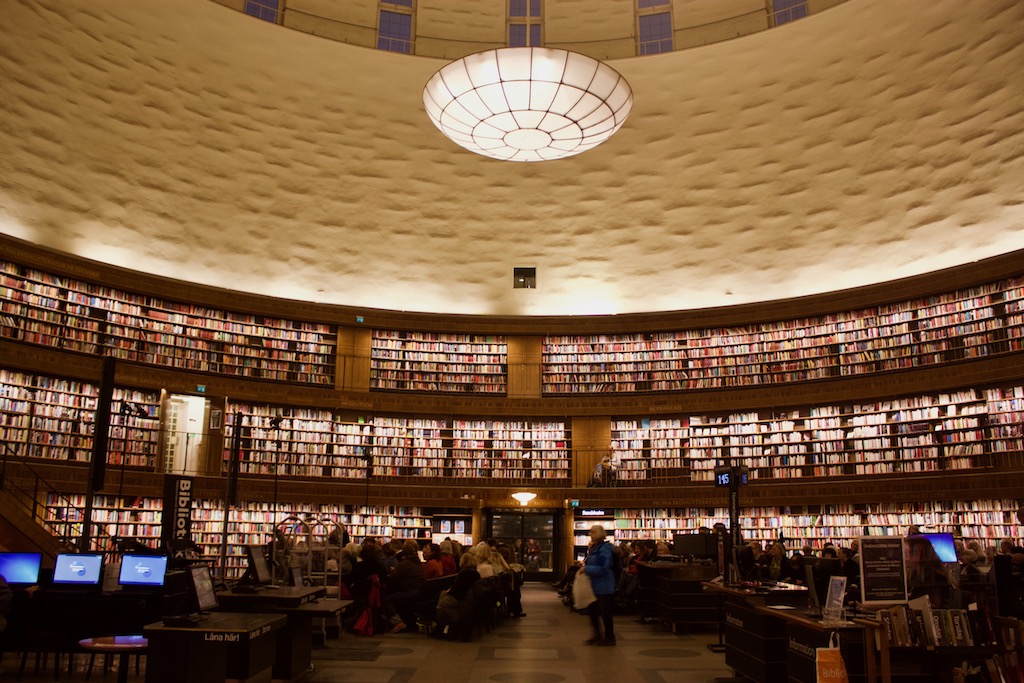 I’m not sure when it happened, but in recent years I’ve become somewhat of a “library traveller” so whenever I visit a new city, I make an effort to check out some local libraries. After having visited some stunning libraries across Europe – like the Szabó Ervin Library in Budapest and the National Library of Finland, when I visited Stockholm, I made it my personal mission to explore as many libraries as possible.

The Stockholm Public Library Is A Swedish Architectural Icon

The library is the main branch of the Stockholm public library system and was first constructed in 1924, finally opening to the public in 1928. Stocked with more than 2,000,000 titles in 100 different languages ranging from Japanese, to Persian, and Russian, the library also contains more than 2,400,000 million tapes, cd’s, and audio books.

Recommended reading: This comprehensive list of 25 things to do in Stockholm.

The Library Was Designed By A Renowned Swedish Architect 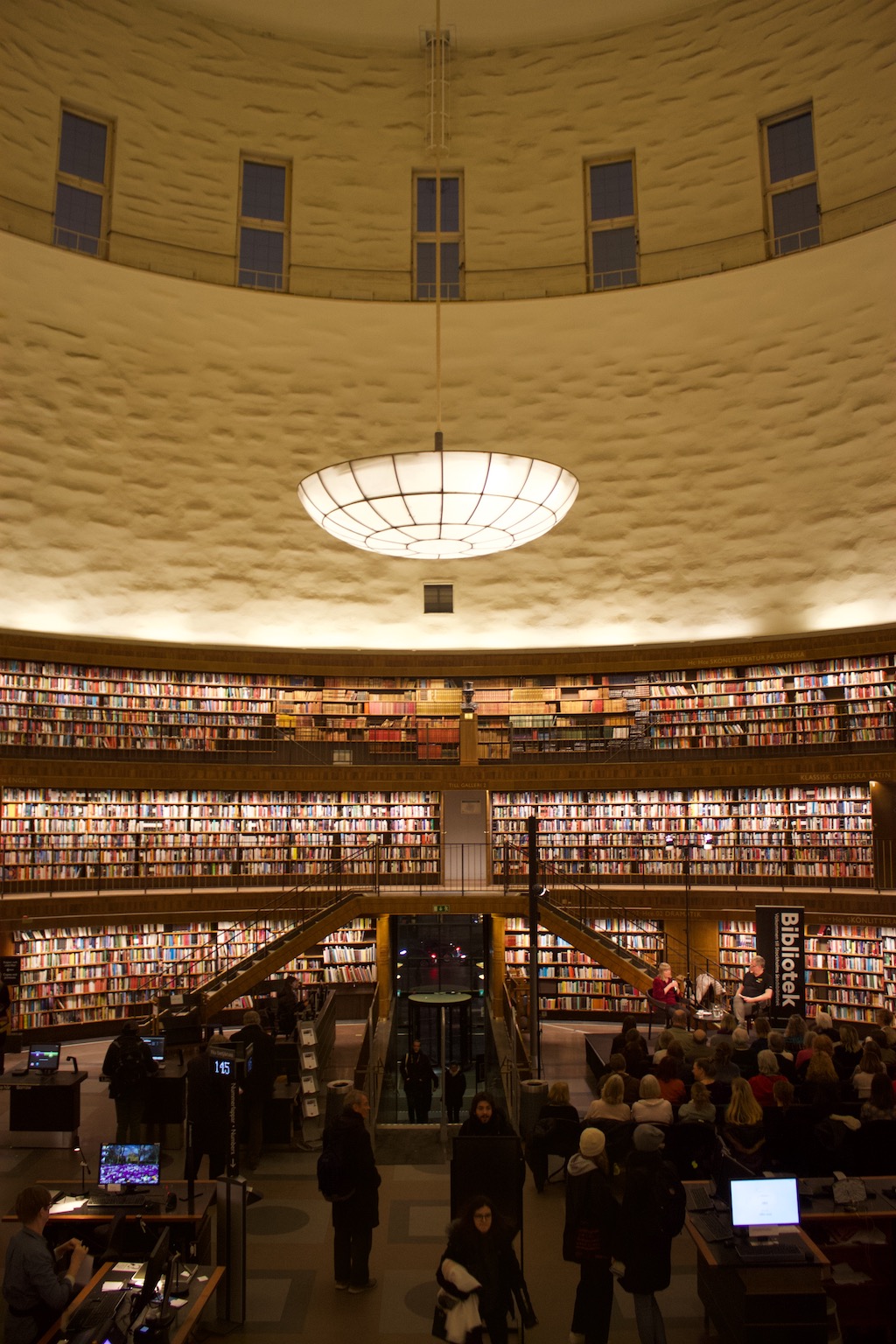 The Stockholm Public Library is a brainchild of Swedish architect Gunna Asplund, who also helped design the Skogskyrkogården, an early 20th cemetery with UNESCO world heritage status. The library is one of now Stockholm’s most prized pieces of architecture, with a circular design which has been lauded as one of the most beautiful in the world. 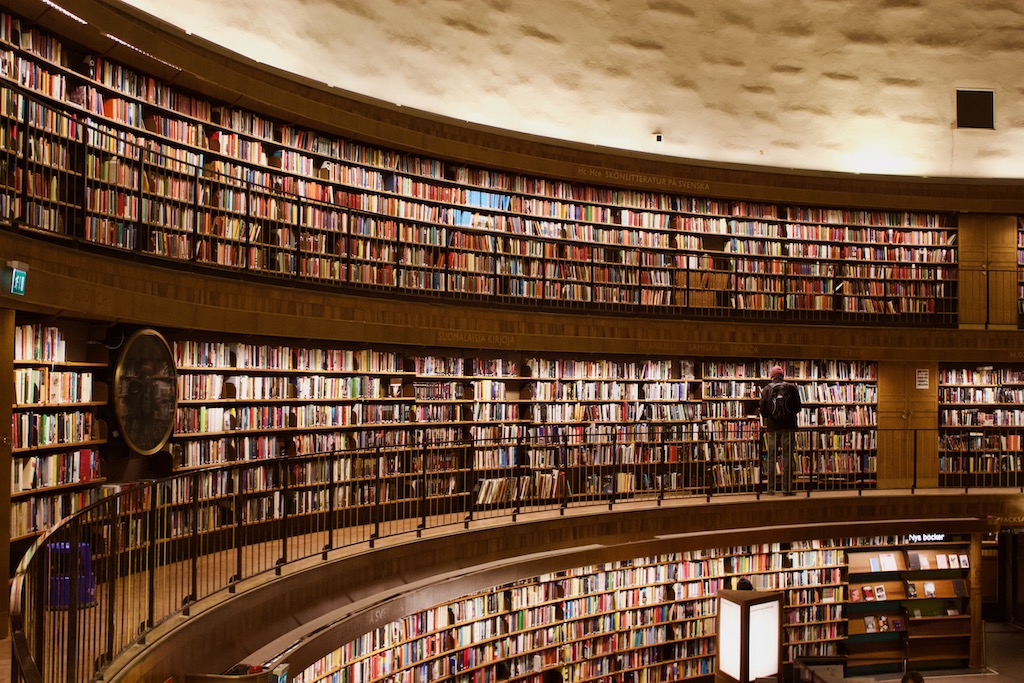 The architecture of the building is a curious one. Some say it was designed in a style known as “Swedish Grace”. The architect’s first vision of the library changed as he further developed the plans:

Says ArchDaily “Asplund’s design was, at first, purely traditional, with a coffered dome, porticoed entry, and lavish exterior wall treatments more suited to a palazzo than a 20th Century library in Scandinavia. The layout of this scheme was essentially retained but, in Modernist fashion, was distilled down to its most primitive geometric elements: a cylinder emerging from a rectilinear box. Sitting at a slight angle from the street and the surrounding landscaping, the austere bulk of the library is seemingly magnified. The walls are finished in stucco, allowing the formal purity of the structure to maintain its full visual impact on visitors and passers-by.” 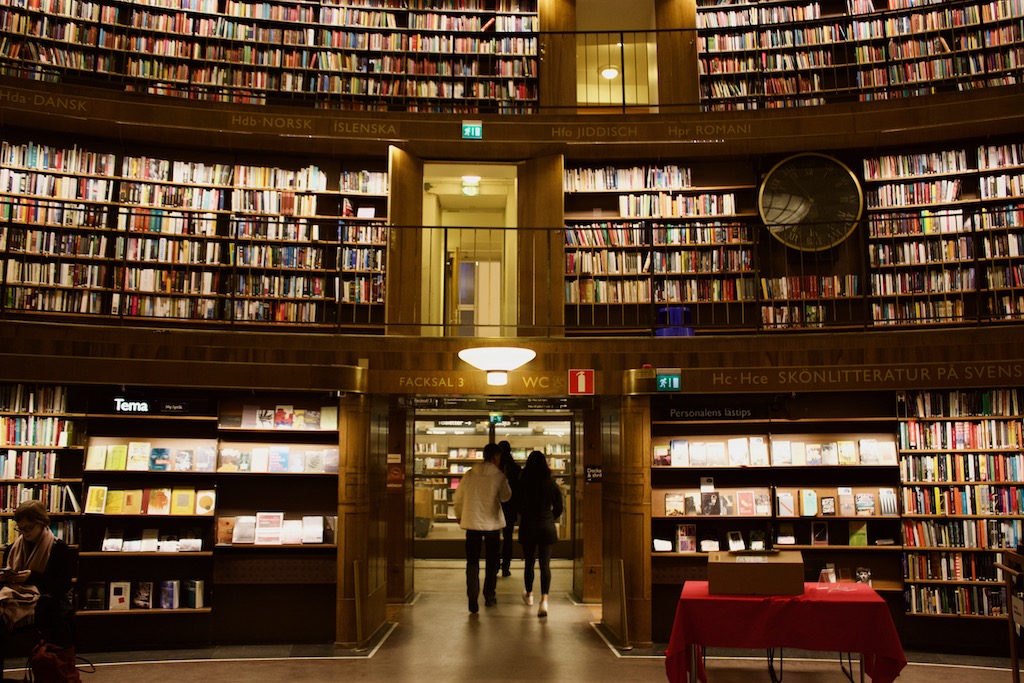 Opting for a rotund instead of a dome, the center of the library resembles a tall cylinder with a flat ceiling. When you enter the library, you are surrounded with books everywhere you look. There are three terraced levels with open shelves and in fact, the Stockholm Public Library was the very first library to offer this feature, enabling people to access books for themselves without the assistance of a librarian. A circle of windows close to the ceiling streams in plenty of light, making the round library and the experience of being there all the more surreal.

This Library Is A Must Visit 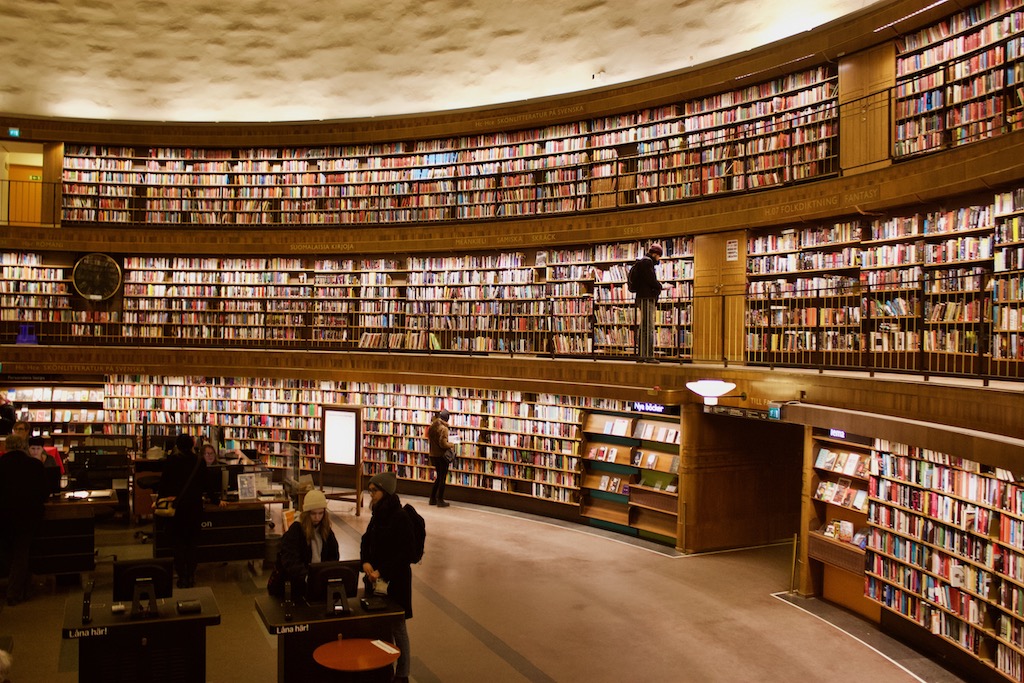 Asplund also designed a park, complete with a small pond in 1931. It’s located just south of the building. In 1932, a west wing was added to the library complex, completing the square base encircling the rotunda. Three annex buildings were later added by other architects who based their ideas on Asplund’s plans for the location. It’s also said the Arnos Grove tube station in North London was inspired by the Stockholm Public Library.

Recommended reading: Some of my favourite blog articles about bookstores and markets – like a used bookstore in Detroit with more than 1,000,000 titles, a small bookstore in Venice with books crammed into gondolas, and an open air book market in Kyiv that’s in danger of being closed down.

If you’re in Sweden, you should spend some time in the library and soak up the vibes of being in such close proximity of more than two million books. If you have time, grab a book, take a seat, and read for a while.

Watch/share this video about the Stockholm Public Library and better yet, subscribe to my Youtube channel for even more travel related videos.

Have you visited the any libraries in Stockholm? Which one was your favourite? Our readers would love to hear what your thoughts.

Just where can you find the Stockholm Public Library? Sveavägen 73, 113 80 Stockholm, Sweden.

About The Stockholm Public Library 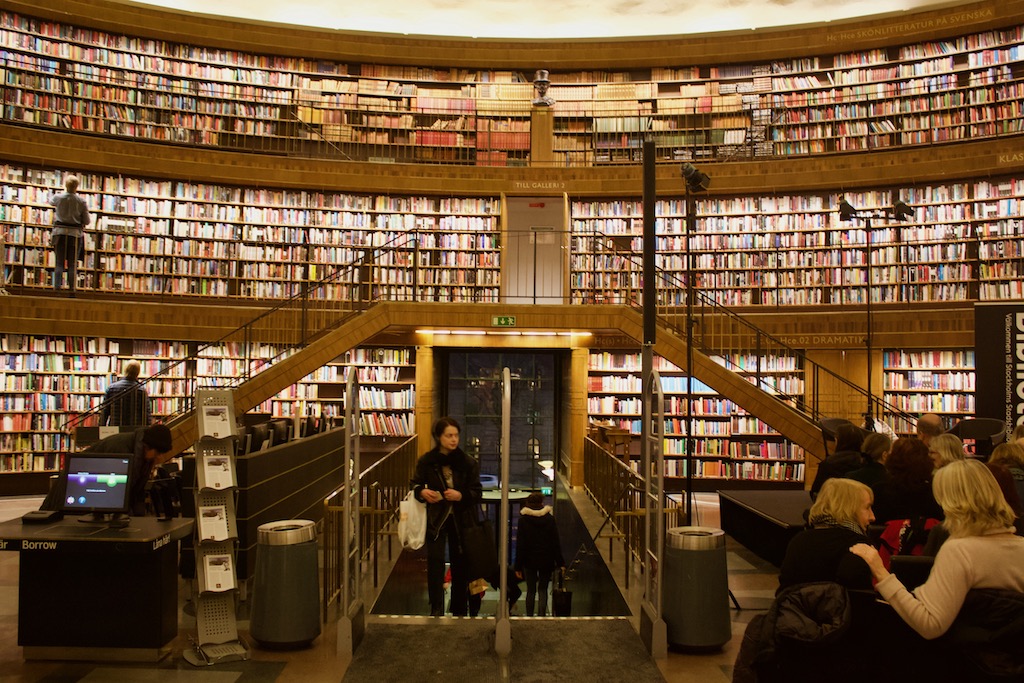 There are many things you need to know about the Stockholm Public Library. We answer your most common questions.

1) Can I get in touch with the library for more information? You can contact customer service at 08-508 30 900 or email [email protected]. Visit their website at https://biblioteket.stockholm.se/en/language/english-engelska

2) What is the nearest metro stop to the Stockholm Public Library? Odenplan on the Green Line.

4) Do you have to pay an entrance fee to enter the library? No, as it’s a public library, you can enter for free.

5) Can I take photos and videos inside the Stockholm Public Library? Yes, you can and there is no need to pay any fees to do so. While this place is certainly “Instaworthy” and snaps from both inside and outside the building will grab you plenty of likes on Instagram, please don’t turn such a holy place for literature into a stage for your photoshoot. Give the venue and the patrons the respect they deserve, take some quick snaps, and move along.

6) How much time should I spend at the library? If you’re just there to take photos and check out the architecture, I’d recommend at least 30 minutes, longer if you read a book and relax for while.

7) Is the Stockholm Public Library suitable for children? Of course! As with most libraries, there is a section especially for children. You can even download their app with ebooks for children.

8) Does the library host live events? Prior to COVID-19, the library played host to readings and other cultural events. Now many of them can be viewed online and you can take part no matter where you are in the world. View their event calendar for more information.

You can easily get around Stockholm in a number of ways; these are the best transportation options:

1) To arrive at Stockholm’s city center, you can drive, take a taxi, or bus from the airport and main bus/train stations:

2) The best ways to get around Stockholm include:

Options about where you can stay when you travel to Stockholm, Sweden.

1) Check out hotels, hostels, apartments, and more with booking.com:

2) I stayed at Connect Hotel City while in Stockholm, one of the more affordable and cool hotels in the area. As Stockholm is on the expensive side, I was happy to find this hotel so I could spend more money on memorable experiences like having a fancy dinner out at the Fotografiskas. They have a hip and cozy lobby space where you co-work or sip a craft beer and the rooms are large and the beds are comfortable. It’s also located close to public transit so it’s  easy to get around the city.

Things you need to know about handling your cash in Sweden:

1) Sweden has its own currency, the krona (SEK).

2) Sweden is notoriously known for being an expensive place to travel, from your accommodation, to eating out, and more. Make sure you plan ahead so you can have the best time there enjoying all of the things you like.

3) Check out this article from The Guardian about the best way to enjoy Stockholm on a budget.

1) One of the best ways to get to know Stockholm is by taking a tour.

2) Is Stockholm safe? Stockholm is considered to be one of the safest cities in the world and as a solo female traveller, I felt very comfortable during my week there. It’s also safe for people of colour, but it’s possible you’ll experience incidents of racism.

3) If you like this corner of Europe, take a look at some of my other blog posts: