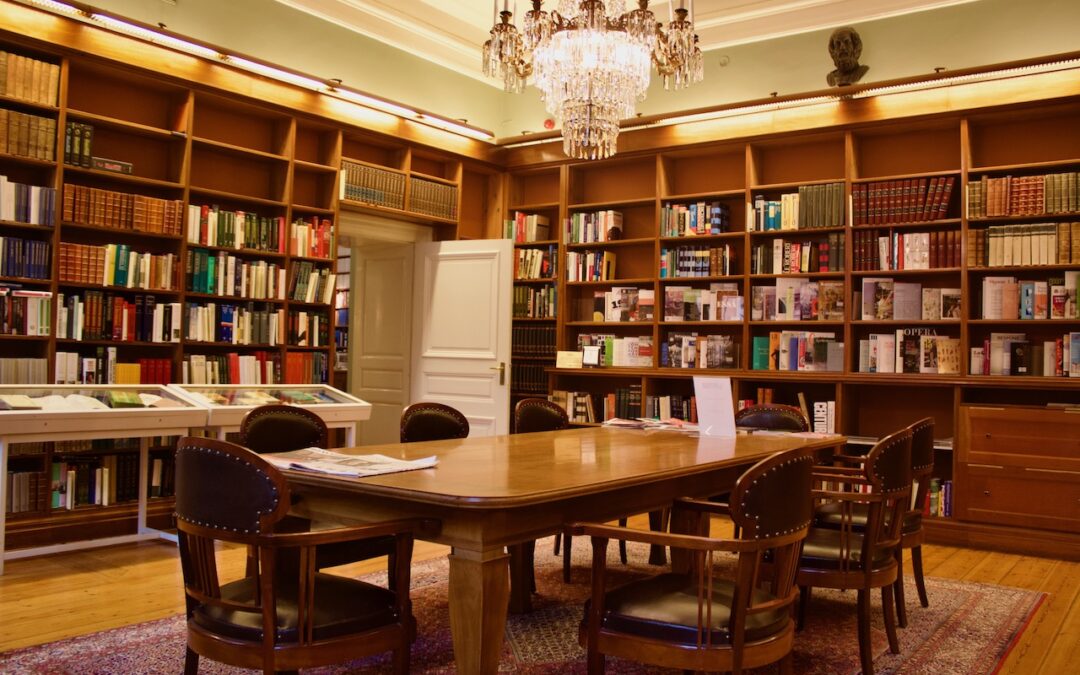 One of the more fun things I did when on holidays in Stockholm was going on a “library tour” through the city. I was awestruck as I entered each place, the home of thousands of books, and more importantly, a vast collection of knowledge. As an added bonus, I also got to check out some really cool modern architecture.

On my library tour, I visited the Stockholm Public Library, as well as the Stockholm University Library. Next on my tour was the Nobel Library, adjacent to the Nobel Prize Museum (which I also recommend visiting).

Established in 1901, The Nobel Library (Nobelbiblioteket) in Stockholm features an extensive collection of literature and research that helps in the evaluation of Nobel Laureates for the Prize in Literature, as well as other awards handed out by the Swedish Academy. To further support their Nobel Laureates, the library also features relevant biographical materials.

More formally known as the Nobel Library of the Swedish Academy (Svenska Akademiens Nobelbibliotek), the library resides in the Stock Exchange Building in Stockholm’s Gamla stan or Old Town. With more than 6,000 books and 200,000 volumes, the Nobel Library is one of Northern Europe’s largest libraries for literature.

The library is subscribed to more than 160 different literary journals in various languages. With the main focus on acquiring contemporary literature (books, manuscripts, articles, reviews, etc.), the library also collects criticism of published works and makes them accessible to Academy members, as well as translators, students, and researchers. The library also stocks literature related to themes exhibited in the adjacent Nobel Museum.

What do you think about the Nobel Library in Stockholm? Do you have any other Stockholm tips? Drop us your best recommendations in the comments.

Where can you find the Nobel Library in Stockholm? Källargränd 4, 111 29 Stockholm, Sweden.

We answer the most frequently asked questions about the Nobel Library in Stockholm:

1) How do I get in touch with the library?

2) What is the nearest metro stop to the Nobel Library in Stockholm?

The nearest stop is Gamla stan, served by both the Red and Green lines.

4) How can I take out a loan from the library?

Library loans can be taken out by the general public or be requested through other libraries across Europe’s Nordic countries.

5) Is there a fee to visit the library?

No, there are no fees to enter the premises.

6) Can I take photos and videos inside the Nobel Library?

Yes, you can. Note, that library patrons may not want to be in your photos and they definitely don’t want to be disturbed while working and studying. Be respectful as you photograph your way around the venue.

7) How much time should I spend at the library?

As access to the library is limited to Academy members, academics, etc., as a visitor dropping by for a quick look, there isn’t much for you to see other than a few of the rooms pictured here. As such, I’d say you need no more than 10 – 15 minutes.

Treat your time there as a way to appreciate and pay respect to the site and the fact it exists. All this literature in one place, enabling education and furthering knowledge. I personally found my brief visit inspiring.

8) Is the Nobel Library suitable for children?

Not at all. Head to the Stockholm Public Library instead, where they host regular programs for young kids.

9) Does the library host live events?

Getting around Stockholm isn’t difficult and here’s an overview on the best transportation options:

1) To reach Stockholm’s city center, you can drive, take a taxi, or bus from the airport, main bus and train stations, as well as ferry ports:

2) Some of the best ways to get around Stockholm?

Highlights on where to sleep in Stockholm, Sweden.

2) I stayed at Connect Hotel City in Stockholm and found it to be one of the more affordable and cool hotels in the city. The hotel features a hip and cozy lobby space where you co-work or have a drink and the rooms are large with comfortable beds. It’s conveniently located close to public transit, so getting around the city is no big deal.

Things you need to know about money in Sweden:

1) Sweden has its own currency, the krona (SEK):

2) Sweden is an expensive destination, from your accommodation, to eating out, and more. Be sure to plan your budget ahead so you can have a great time in the country.

1) One of the best ways to experience Stockholm is to take a tour with Get Your Guide:

2) Stockholm is seen as one the safer cities in the world and as a solo female traveller, I was comfortable during my week there. It’s also said to be safe for people of colour, but it’s quite possible you’ll experience incidents of racism.

3) If you like travelling through Europe’s Nordic countries, give some of my other posts a read: